She may yet have to make her big screen debut, but Shanaya Kapoor is already a hot property in Bollywood. The young actress, who is gearing up for her first film, is already being spoken about for her sartorial choices. Take a look at her social media handle and you’ll know just what we’re talking about. Shanaya, who is Sanjay and Maheep Kapoor’s daughter, has already been signed on by several brands in recent months.

The actress was in the news after she was trolled for her very first ad and compared to Ananya Panday. The nepotism debate that gets triggered every time a star kid enters Bollywood, was once again seen on social media as some users wrote disparaging comments. In fact, Shanaya’s father, Sanjay Kapoor, took to Instagram to write a sweet comment for his daughter. He wrote, “The shoot seems real fun! Love the way you devoured that bowl of pasta @shanayakapoor02. @maheepkapoor take notes (sic).”

Shanaya, who will make her big screen debut with Karan Johar’s production house, has reportedly been busy with various workshops. When she announced her B-Town debut on Instagram, she had written, ““Woke up today with the most grateful heart! Here’s to a great journey ahead with the @dcatalent family. Excited to kickstart my FIRST FILM (ahhh!!) this July by @DharmaMovies, can’t wait for you all to see what we’re up to! Stay tuned! #DCASquad.” 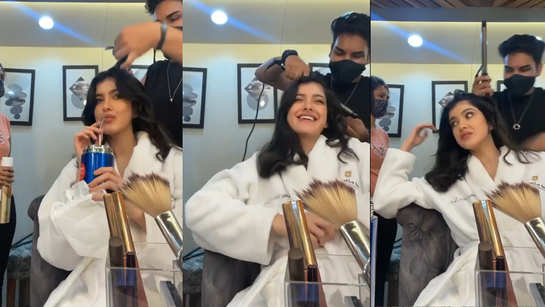